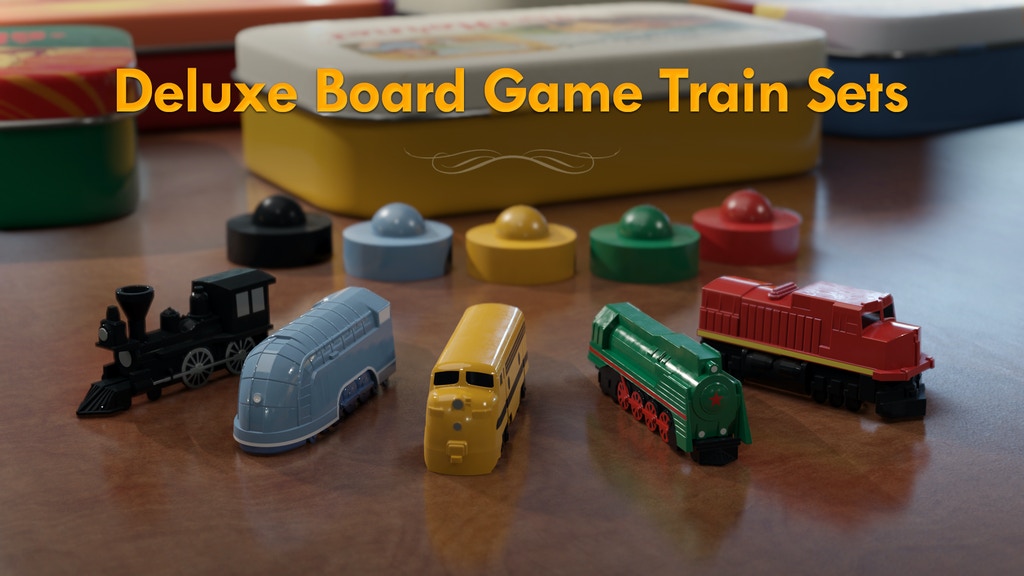 Upgrade your board gaming experience with beautiful miniature train sets!

Latest Updates from Our Project:

Well, this isn't a fun update to write. But it's an important one.

It has come to our attention that our tins do not fit insert that comes with the most recent printing of Ticket to Ride: Europe.

But at some point--exactly when is unknown to us--the insert for Ticket to Ride: Europe changed such that the wells became small enough that they do not fit our tins.

Below are photographs to show you what we mean:

You'll see that the insert design is identical, the only difference being that the newer insert is glossier with slightly smaller wells. If your Ticket to Ride: Europe insert looks like this, the tins will not fit.

We apologize for not finding this out sooner. We'd tested these tins with different copies of Ticket to Ride: Europe and sent them out to others to test with their own copies. We thought we'd done sufficient due diligence, but this insert just escaped our notice.

Unfortunately, we cannot change our tins to accommodate this one insert. All the artwork would need to be redone for the new dimensions and we don't think a smaller tin would look as good. We're also not sure that our trains would fit comfortably into a tin small enough to fit into this insert.

It's been a whirlwind week and we thought we'd included this information in on our campaign page. But as we were reviewing the page for this update, we saw that it accidentally got left out.

We have now updated our campaign page and FAQ to reflect these insert incompatibilities.

If you've backed our project expecting that our tins would fit these particular copies of Ticket to Ride, and insert compatibility with these editions was important to you, we understand if you want to cancel your pledge.

The good news is that our tins still fit the inserts in most versions of Ticket to Ride, as shown by the photos below.

We suppose it's possible that there may be other printings of Ticket to Ride out there with incompatible inserts. We have not bought, and could not buy, every printing of every edition. But, as far as we've been able to tell, our tins will fit in most inserts out there.

Though our tins won't fit every Ticket to Ride insert, we can assure you that they'll fit perfectly on any regular Ticket to Ride map and will look great. Hopefully, you'll agree with us that that's the most important thing.

For this update, we had written a short essay about the history of streamliner trains and train advertising in the 1930s, including a brief history of the Mercury. We had researched it for a long time. It was interspersed with photos and everything.

We think it was so beautiful it might have made you cry.

We typed it, as we always type our updates, directly into Kickstarter.

When it was done, we proofread it (really well this time!) and decided that we needed to add just one more photo.

Our mouse navigated up to our browser tabs and we clicked.

But instead of opening the tab we wanted, our current tab closed. The one in which we had been writing our Great American Work of Nonfiction.

No big, right? We'd been saving our progress as we went along, right?

No, Dear Reader, we had not.

We love you and we love trains. But not enough to rewrite the whole thing.

So instead,  we present to you a short summary of what we had written with the photos that we thankfully had saved.

Streamliner trains of the 1930s

In the 1930s, designers started covering up their locomotives with metal casings. They did this to make their trains more aerodynamic and look hella cool. This was called streamlining. Like what we're doing now to the story we had written before.

In this section, we talked about Art Deco and how its futuristic look paired perfectly with the new streamlined trains. It was Hemingwayesque. There were sentences. The sentences were short. And they were good.

Here we talked about the history of the Mercury and our love for it, which we knew from the beginning we wanted as the blue train for our set. The Mercury, designed by legendary designer Henry Dreyfuss, was actually a series of three trains that ran in the northern U.S. from 1936 to 1959. Sadly, they were all eventually scrapped.

Our love for the Mercury is like the Old Man's love for fishing and Joe DiMaggio. But just as the Old Man's marlin was eaten by sharks, so too was our Mercury section eaten by Kickstarter's lack of an autosave feature.

Here we talked about the Mercury's ads. Despite being one of the most beautiful streamlined trains in history, the Mercury's ads weren't the most attractive examples of Art Deco train ads we had seen. Could they be improved upon? Careful readers would have noted subtle references to "À la recherche du temps perdu."

In this section, we talked about how our amazing artist, Julianne Griepp, used to neither drawing streamlined trains nor in Art Deco style, produced the Mercury cover we'd eventually use as her first draft.

Here we sort of just wrapped everything up and teased the next update. We had a killer last line that we cannot recall at the moment. So we substitute this one:

"And so we chug on, trains against the track, switched back ceaselessly into the past."

We promise to regularly save next time, y'all.

Have a good rest of the weekend,

If you've been board gaming as long as we have, you've seen a lot of train board game covers.

Seriously, y'all, sooooo many.

They all tend to look the same: a 19th century steam engine, drawn in a realistic style, traveling at an angle towards the viewer.

Sometimes you're lucky and you get a different type of engine, drawn realistically, traveling at an angle towards the viewer.

We get it. The publisher needs to tell the customer that this is a train game and it takes place at a certain period in history. It's hard not to slap a realistically drawn train on the cover and call it a day. There's nothing wrong with that. None of these are "bad" covers.

But are any of them memorable?

We've always been most impressed by covers that take a great degree of artistic license with how they depict their off-center trains. For example:

Just look at that red train! The severe sans serif font! The billows of steam blowing out of the bottom of that train! An RRR logo that ever so subtly calls to mind "CCCP." With just a few small artistic choices, this cover immediately evokes a particular time and place in history. You want to turn this cover box over to find more about this game.

Railroad Ink is a relaxing roll and write game. The calming blues and simple hand-drawn train and track tell you exactly what kind of game is inside the box. And it makes the game stand out from all the others on the shelf.

Yardmaster is a simple, fast-playing, minimalist card game. This freighter, moving quickly and drawn in a simple and bold style, clearly communicates what type of gaming experience you're in for.

We wanted to have beautiful, evocative cover art like this.

There was just one problem.

On the one hand, we needed to let people know what the trains in our tins looked like.

On the other hand, we didn't want to bore you with just realistically drawn trains coming at you from 45 degree angles.

Well, it turns out that advertisers going back over 100 years had already solved this problem.

But that's a topic for our next update.

P.S. It's Friday! If you're in North America, just keep on "chugging" for a few more hours--then you'll finally be able to "blow off some steam."

P.P.S. Yes, we are committed to the bad train puns. You could say we have a "one track" mind.

P.P.P.S. Thanks to all of you who have voted in our poll! If you're a new backer, please go HERE to vote on what kinds of train-related minis you'd like us to make next. Please just vote once. We'll leave the poll open for a few more days so more people can participate.

Wow. We are astonished by all of your support. Thank you!

As we did in our last update, here are some facts to put those numbers in perspective:

Anyway, thank you for helping us reach this arbitrary milestone.

We've been reading through all your suggestions in the comments about what products you'd like us to make in future Kickstarters. We want to make what our backers want, so now's your chance to decide!

We've taken the top five suggestions and put them in a poll.

That's all for now, folks. Thanks again for supporting our project!

1,000 of you have trusted us to make and send you some cool plastic trains!

Here are some statistics to put this incredible number into perspective:

Anyway, thank you so much! Y'all are the best!

And now, time for just a few of the awful train puns we promised: